I can’t speak for other PDA’ers but with Finn; passion courses through his veins, reverberating throughout his emotions…..positive or negative, love or hate. I’ve lost track of the times we’ve muttered the words: ‘if we could find a way to channel that….’.

A passion for animals, word play, role play, justice, music, humour, friendships and water. The trick when managing these passions, I’ve discovered slowly (the penny doesn’t always drop very quickly here) is to
a) not label the passion and
b) refrain from direct praise.

As highlighted repeatedly in PDA guidelines (for people like me who rely on clear instructions); labelling who he is, what he likes/dislikes and praising him, ignites those bothersome demands. It’s easier said than done in practice, so I often find myself performing a mildly controlled and embarrassing  ‘whoop whoop’ if he appears pleased with himself – that and labelling the task at hand, like ‘that looks really tricky’ or ‘I couldn’t do that’.

I treasure his passions, cautious that any over zealousness on my part will culminate in his refusal to partake because I’ve riled his spiteful face into cutting off its nose. This may come across as a tad dramatic, but I have plenty of evidence to back up my guilty plea:
Exhibit A: He wanted to play the guitar so I excitedly arranged lessons, bought a guitar in his favourite colour and clearly didn’t hide the fact that, in my head, I already had him up on stage with Ed Sheeran (the autism in him gifts him with the ability to remember lyrics to 100’s of songs) It was a complete shambles – he either couldn’t bring himself to go, or he would go and then run away when we got there. Very occasionally he would have a brilliant lesson and almost every time we left he would point out, very loudly so that his lovely teacher could hear him, that he would rather learn to play the drums.

Exhibit B: Animals – he loves them all and they flock to him so I made the assumption that he might like horse riding lessons. It was a ‘no’ from Finn and it’s generally a ‘no’ anytime we assume he might like to do something (labelling) or if the word ‘lesson’ comes into play.

I won’t bore you with my endless pile of evidence, suffice to say that I was guilty, with diminished responsibility because it was at a time when I was a PDA parent rookie, blindly following the wrong rule book.

About 4 months ago, my sister who has a condition called Hereditary Spastic Paraplegia, suggested we go along to her ‘happy place’; the British Disabled Water-ski and Wakeboard Association. He had a go and he properly loved it!

There are a number of reasons this new passion of his works for him:

1. He gets to wear a wetsuit which nourishes his proprioceptive needs – deep touch pressure helps to release serotonin.
2. He loves water – it has always had a calming effect on him.
3. He doesn’t view his sessions as ‘lessons’.
4. He is in control of his immediate environment, choosing when, where, what and how he moves.
5. There’s no-one in his immediate space – he doesn’t have to process any vocal instructions. Communication is limited to hand signals.
6. He has his own driver and an observer! When I say ‘driver’…this superhero is a British Disabled Water-ski World Champion, tirelessly giving up her time to give back to the sport. Finn’s fussy with who he likes and it’s obvious he adores her.
7 Finn loves banter – it escalates him to a position of parity with adults and he gets away with it at the club. The awesome ops manager at the lake delivers banter in abundance and his passion is palpable.
8. Finn doesn’t have to commit to regular sessions each week, he just does and very rarely, doesn’t, which is fine.

From my point of view, the massive added bonus is that Finn is exposed to people at the club with a plethora of disabilities, actively breaking barriers and overcoming hurdles with unsurpassed bravery at a time in Finn’s life when he is battling, big time, with his diagnosis. The subliminal message that ‘limits only exist if you impose them on yourself’, is unmistakably strong here.

If you’re interested in finding out more, please visit the British Disabled Water-ski and Wakeboard site here: www.bdwwa.org or email them: office@bdwsa.org.

The smile on Finn’s face when he’s on the water is breathtaking and highly addictive and I’m going to do my level best not to muck it up with expectations and assumptions, fingers crossed! 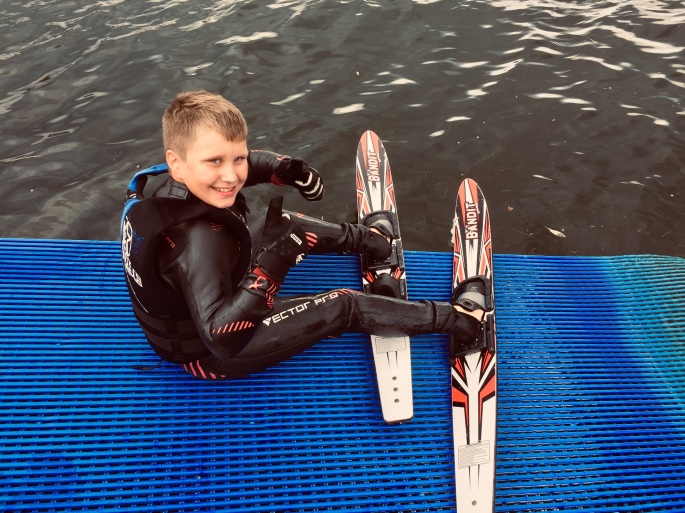 Navigating the shambolic parenting of a PDA'er

A daily selection of the best content published on WordPress, collected for you by humans who love to read.

Navigating the shambolic parenting of a PDA'er

The best longform stories on the web

The latest news on WordPress.com and the WordPress community.